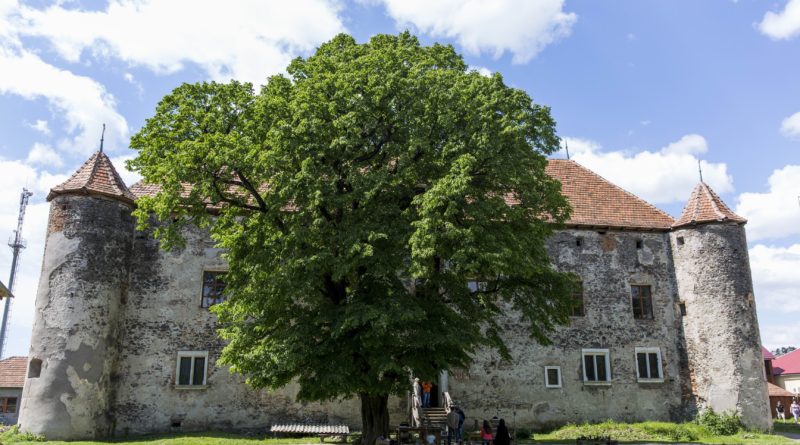 Transcarpathia is an excellent western region of Ukraine with a rich history, magnificent nature, hospitable people and a huge number of unique sights.
Here you can relax with your soul and body surrounded by cheerful people, learn a lot of interesting things about the local culture, traditions, enjoy the magnificent sunset or sunrise, take a walk in the forest paths, climb the mountain tops from where you will have a unique panorama to the surroundings.
This region is fascinating at first sight, therefore it is not surprising that most Ukrainians prefer to have a rest in Transcarpathia, at every opportunity.

Today it is considered that Transcarpathia is the most popular and promising tourist region of Ukraine. All year round it is visited by thousands of tourists from different parts of our country and abroad. The formula for the success of the westernmost part of Ukraine is very simple.
Magnificent nature, careful attitude to attractions, good road junction and proximity to the border of four foreign countries: Poland, Hungary, Romania, Slovakia.
Therefore, it is not surprising that in the distant past because of the territorial peculiarity, the local lands belonged to different states, which in turn erected castles and fortresses for defense and strengthening of their power.
Unfortunately, today there are only ruins from many fortifications, as a reminder of the past history and glory of the local region.
But, fortunately, on the excellent lands of Transcarpathia there are still some castles in good condition, which managed to be restored and preserved to our times.
One of such facilities is the castle of Saint Miklos in Chynadievo, which deserves attention and it is worth visiting every connoisseur of antiquities. 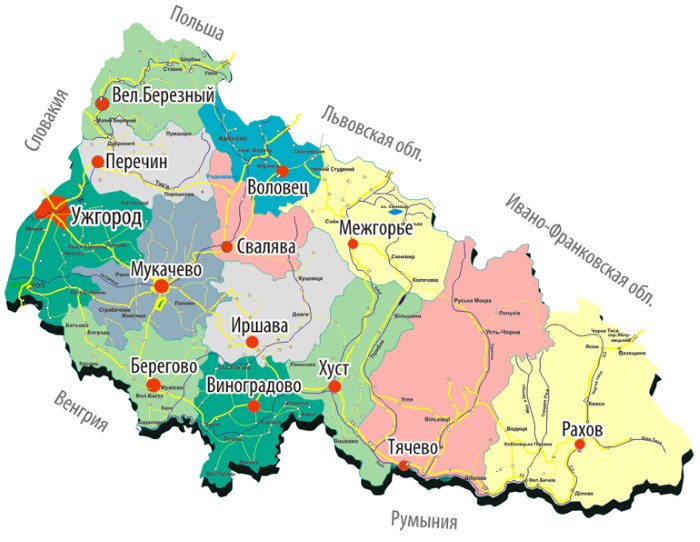 Given the strategic importance of the local region and the proximity to the Russkie Vorota pass through which troops often moved, there was a great need for reliable strengthening.
Thus, in 1450 Hungarian Count Imre Pereni built the castle of Saint Miklos, which served as a defensive structure.
The fortress was built in small sizes, if of course compared with the Mukachevo Castle “Palanok”, which is located very close, only 12 kilometers away.
The exquisite two-story structure has two towers on the sides with a cross-shaped roof, very spacious rooms of interesting spherical arches.
The walls, massive enough in some places have a double laying, which reliably hide the secret passages from prying eyes.
Under the castle there is a deep cellar luncheon where food was stored at the time. 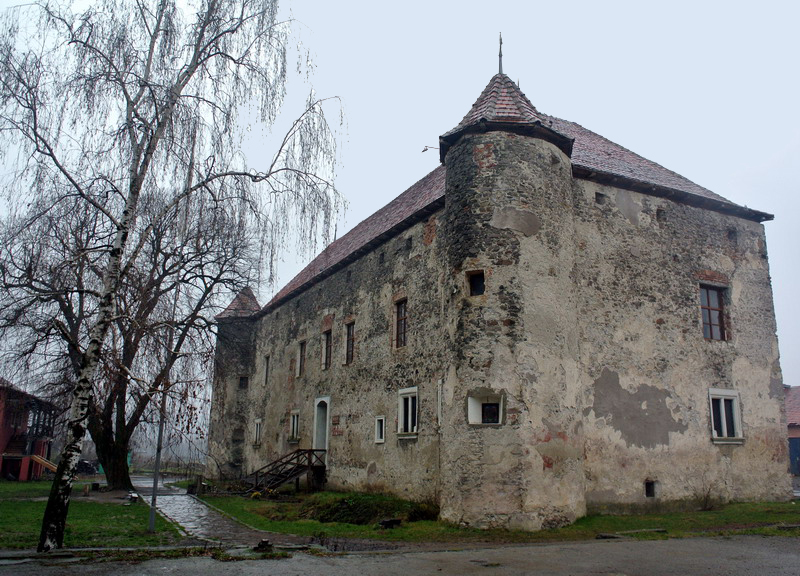 Naturally, for several centuries of its existence, the castle quite often changed owners, and they in turn rebuilt it at their own discretion.
In 1612, the classic castle, buys the influential Transylvanian princes Rakotius.
And from this pirada the brightest, interesting and at the same time tragic history is being nailed.
In 1676, after the death of Ferenc Rákóczi, the castle will be inherited by the widow of the former owner Ilona Zrini.
For a long time, the young princess lived in Mukachevo Castle, under the care of her unbearable mother-in-law. Between women there were frequent conflicts, they lived like a cat with a dog.
But, Ilona suffered for the sake of her two children.
Eyo’s son Ferenc Second Rakoczy was the direct heir of the wealth of the princes Rakoczy, so there was no escape except humility.
Soon, the woman met Count Imre Tekeli, he was the freedom-loving Transylvanian aristocrat, who led the rebels – the Kuruts, and they in turn fought desperately against the Austrian crown.
Between the pair, sincere and beautiful feelings were born that were stored throughout their life, despite severe trials.
Ilona was older than the count for 14 years, naturally the Austrian crown, who knew well about Tekeli’s plans and moods, did not welcome and even condemned the relationship between the pair.
Falling in love decided to avoid prying eyes, for some time they met secretly in the castle of Saint Miklos. If you believe the legend, it was not difficult, since both castles were connected by an underground passage. Then, in secret meetings, the need was not beaten, they decided to get married, in 1682 they officially became spouses.

The two rebels were united not only by the sparking of a sense of love, they bravely fought against the tyranny of the Austrian crown, which brought much pain to their families.
Ilona could not forgive the murder of her father and brother, who were stripped of their lives by the order of the king.
Representatives of a noble family were accused of attempts to raise an insurrection, and were executed.
In the end, Ilona’s mother could not stand the tragedy, she lost her reason and two years later the poor woman died in the cold walls of the monastery.
For Tekeli, the struggle against the Austrian crown also had personal scores that took the life of his father. At the time of death of the native person, the count was only 14 years old.

Today the princess is visited by legends and incredible stories in the region.
It symbolizes the image of a self-confident, strong-willed and very intelligent rebel woman who has always fought for justice and freedom of choice throughout her life.
In history, she is remembered as a representative of the noble family, that she was not afraid to challenge the Austrian crown and for a long time waged an uncompromising struggle against her.

Perhaps the most vivid example of this conflict is the documented historical event that took place in Palanok Castle.
Ilona, bravely held the defense of the castle during the siege of the Austrian army for a long 27 months.
And only faced with a cynical deception (she was handed over a trumped-up letter on behalf of a captive husband) she signed an act of surrender.
As a result, until the end of their lives, Ilona and Tekeli lived in exile, on the territory of Turkey.

The boldness of a fragile woman was admired by experienced governors.
Even the Turkish sultan Mehmed IV was fascinated by the bravery of the princess, he awarded Ilona with the award “Atman”, this honor was given to the only woman in the history of Turkey.
Today, on one of the terraces of Palanca, you can see the sculpture of Ilona Zrigny and her son Ferenc Rákóczi as reminders of the great woman who lived in the region.

Sculpture on the terrace of Palanok Castle, Ilona Zrigny and her son

After the death of Iloni, in 1703, the son of a strong-willed woman, Ferenc Racocia, managed to return to the beautiful castle of Saint Miklos for a short time.
At the time of the visit, he led the new forces of the rebel army against the Austrian crown.
As a result, Racuzzi suffered defeat, and his land and castle, among other things, moved from the property to the Austrian crown, which he gave to the family Schönborn.

Today Saint Miklos is a state property that is in concession.
Under the contract, the architectural monument of the XIV century is guarded by the Transcarpathian artist Joseph Bartosha.
Together with his wife, he revived this wonderful castle, which is partially restored and opened to tourists.
Traditional and modern marriage ceremonies, exhibitions, orchestra performances, theatrical programs, tournaments, master classes, various media festivals are very popular here: the flower festival, and the Silver Tatos festival.

On the territory of the castle there is an information center, where everyone can book an excursion or get very useful tourist information.
Also here you can order a guide, which will open for you many interesting stories, legends, give useful advice about the nearest sights and routes, will lead to the most secret places of the castle.
As a rule, one of the guide’s programs includes an exciting tour of the inner secret passage, in the wall of the building, which wraps the entire castle around the perimeter.
Found these walk quite accidentally in the 19th century, during the restoration of St. Miklos.
What a surprise, when in one of the secret passage was found the skeleton of a man.
Tourists are allowed to enter this terrible and at the same time interesting part of the castle. 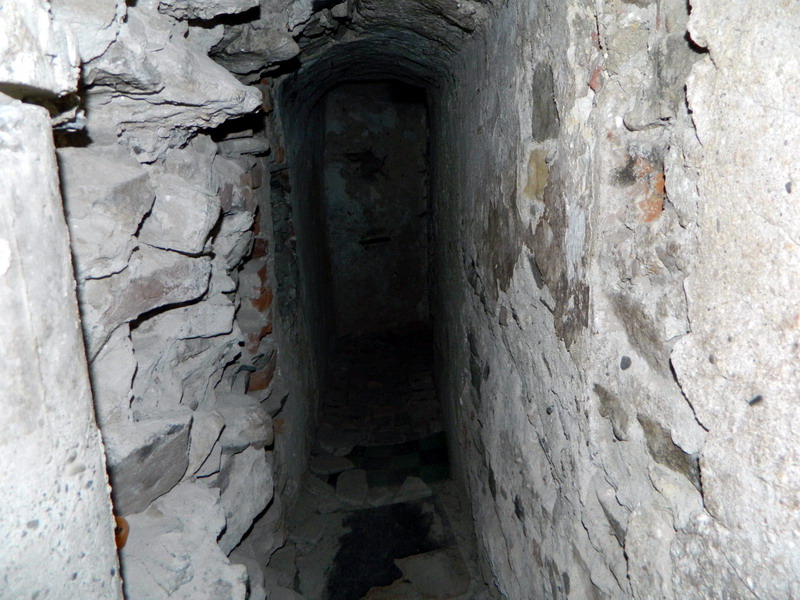 When planning to visit the castle of love of St. Miklos, pay attention to the nearest popular attractions of Transcarpathia, where you can also beat with the availability of free time.

First of all, you should look at the Mukachevo Castle Palanok, which towers majestically to the skies in the beautiful city of Mukachevo, just 12 km from St. Miklos.

If you like walking, I recommend that you go to the magnificent waterfall of Skakalo from St. Miklos Castle, which is cozy nestled among a picturesque place.
In itself, the waterfall is not large, its total height reaches only 4 meters, but it is definitely worth beating here. During the route, the beautiful nature of the Ukrainian Carpathians opens before you, and the fresh mountain air saturated with forest grasses will fill you with positive energy and betray a lot of positive emotions.
Beautiful waterfall from Chinadievo is only 3.5 km apart – it’s about an hour’s walk.

Next is to see the fairytale Schönborn castle, which also has an interesting history, architecture with astronomical bias, many legends and magnificent nature in the neighborhood.
The structure is located at the route Kiev-Chop, 18 km from the city of Mukacheve. 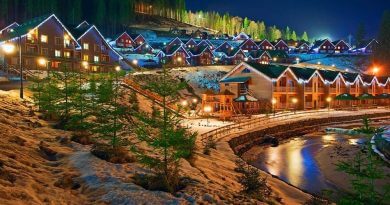 Bukovel. The ski resort of Ukraine 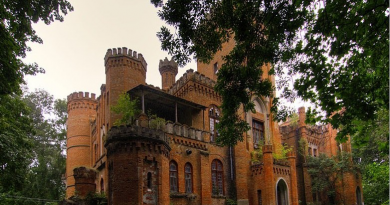 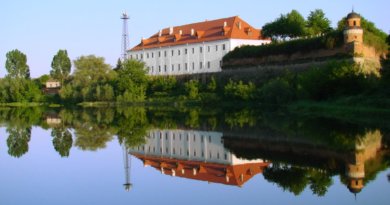 One thought on “Castle of Saint Miklos Chynadiyevo”